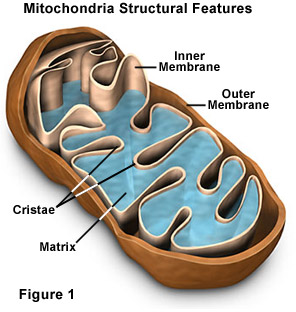 Mitochondria (singular: mitochondrion) are organelles within eukaryotic cells that produce adenosine triphosphate (ATP), the main energy molecule used by the cell. For this reason, the mitochondrion is sometimes referred to as “the powerhouse of the cell”. Mitochondria are found in all eukaryotes, which are all living things that are not bacteria or archaea. It is thought that mitochondria arose from once free-living bacteria that were incorporated into cells.

Mitochondria produce ATP through process of cellular respiration—specifically, aerobic respiration, which requires oxygen. The citric acid cycle, or Krebs cycle, takes place in the mitochondria. This cycle involves the oxidation of pyruvate, which comes from glucose, to form the molecule acetyl-CoA. Acetyl-CoA is in turn oxidized and ATP is produced.

The citric acid cycle reduces nicotinamide adenine dinucleotide (NAD+) to NADH. NADH is then used in the process of oxidative phosphorylation, which also takes place in the mitochondria. Electrons from NADH travel through protein complexes that are embedded in the inner membrane of the mitochondria. This set of proteins is called an electron transport chain. Energy from the electron transport chain is then used to transport proteins back across the membrane, which power ATP synthase to form ATP.

Mitochondria have many other functions as well. They can store calcium, which maintains homeostasis of calcium levels in the cell. They also regulate the cell’s metabolism and have roles in apoptosis (controlled cell death), cell signaling, and thermogenesis (heat production).

Mitochondria are thought to have evolved from free-living bacteria that developed into a symbiotic relationship with a prokaryotic cell, providing it energy in return for a safe place to live. It eventually became an organelle, a specialized structure within the cell, the presence of which are used to distinguish eukaryotic cells from prokaryotic cells. This occurred over a long process of millions of years, and now the mitochondria inside the cell cannot live separately from it. The idea that mitochondria evolved this way is called endosymbiotic theory.

Endosymbiotic theory has multiple forms of evidence. For example, mitochondria have their own DNA that is separate from the DNA in the cell’s nucleus. It is called mitochondrial DNA or mtDNA, and it is only passed down through females because sperm do not have mitochondria. You received your mtDNA from your mother, and you can only pass it on if you are a female who has a child. It is also circular, like bacterial DNA. Another form of evidence is the way new mitochondria are created in the cell. New mitochondria only arise from binary fission, or splitting, which is the same way that bacteria asexually reproduce. If all of the mitochondria are removed from a cell, it can’t make new ones because there are no existing mitochondria there to split. Also, the genome of mitochondria and Rickettsia bacteria (bacteria that can cause spotted fever and typhus) have been compared, and the sequence is so similar that it suggests that mitochondria are closely related to Rickettsia.

Chloroplasts, the organelles in plants where photosynthesis occurs, are also thought to have evolved from endosymbiotic bacteria for similar reasons: they have separate, circular DNA, a double membrane structure, and split through binary fission.